10 Universities in Kenya to Study in To Get Jobs Fast 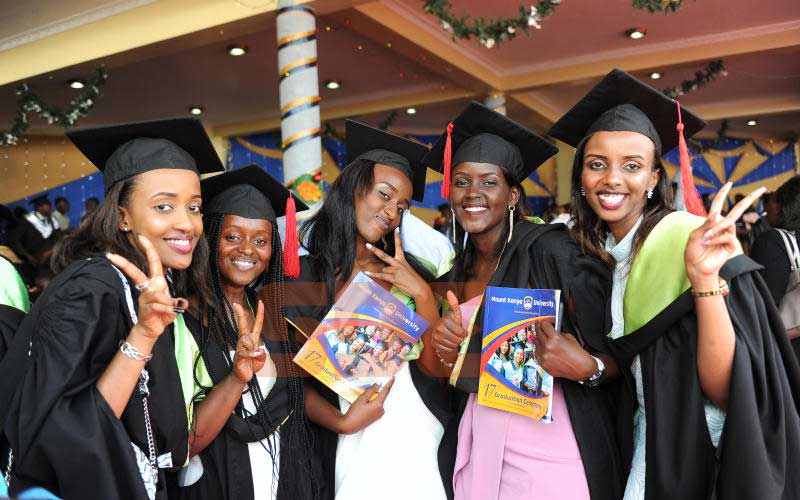 10 Universities in Kenya to Study in To Get Jobs Fast. The University of Nairobi (UoN) supplies the highest number of graduates to Kenya’s job market, according to an international research agency.

A report titled ‘State of Graduate Employability in Kenya’ by CPS International to be released today, ranked UoN the top university with most continuing students employed nationally with an index score of 26.8 percent.

The study was conducted within a period of three months from November 2019 to January this year. It was done by CPS International which has been conducting research in Kenya on higher education since 2012.

UoN also topped the top five public universities with most students employed while studying, with about 26.8 percent of its students either employed or self-employed compared to Kenyatta University which stood in the second position with 21.3 percent.

Among top private universities with most employed continuing students, Mount Kenya University was ranked first with about 17 percent of students working while studying compared to six percent at USIU, 5.8 percent from Strathmore, and both African Nazarene University and KCA University tying at 4.9 percent.

Others are analytical and problem-solving skills (73.28 percent), right work-life attitude (38.81 percent), ability to adapt and act in new situations (32.84 percent), planning and organization skills (28.36 percent) and foreign language skills as the tenth at (4.48 percent).

The majority of the universities surveyed (75 percent) felt that the reputation and ranking of the university affect the employability of their graduates, but 30 percent of the administrators that took part in this study disagreed with this position.

On whether overseas graduates are better at their workplace than locals, about 49.2 percent of universities disagreed with this position while 50.8 percent concurred with the view.

On whether university education in Kenya produced high-quality graduates, universities tied at 38.1 percent for those that agreed with this assertion and those opposed.

The study shows the tie above illustrates that even within the academy, there are major concerns on the quality of graduates produced locally.

A total of 60 percent of universities agreed that courses offered in local universities are more relevant to employers’ needs while only 12.3 percent disagreed with this view.

The study shows the most employed graduates, 46.7 percent, were from business and economic studies, with 11.1 percent from engineering and 8.9 percent from medical studies.

ICT and natural sciences accounted for 6.7 percent of graduates while art and design accounted for 4.4 percent while 2.2 percent are from law, humanities, and others.

Only 55 percent of universities said they had at least one or more employment contracts (MoUs) with companies, organizations, or institutions. Twenty-eight percent did not have such agreements.