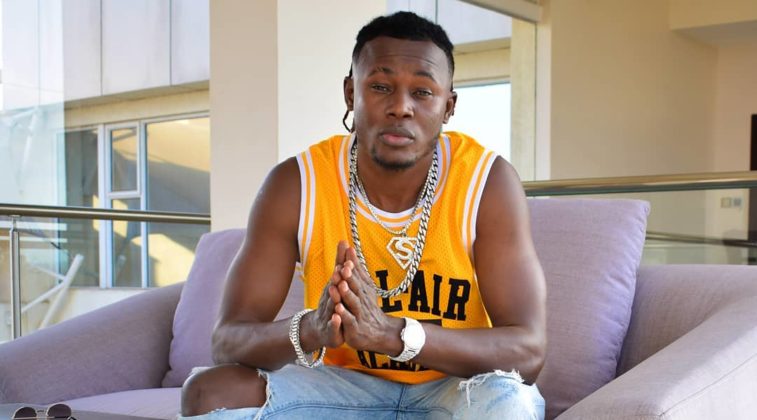 Dancehall in simple English and Swahili

He was born in Huruma and grew up with his Ugandan mother, partly in Uganda and in Kenya. He learned the Ugandan language as a result and uses it in some of his songs. His father was polygamous, and Ali admits growing up in a violent homestead with his father beating up their mother. Arrow Bwoy was the last born in a family of 12 siblings.

Arrow bwoy started music when young and drew his inspiration from Chameleone, E-Sir, and RedSan. He was part of a crew in 2012 called the Qbic crew.

The crew released three singles including, Tam Tam, Make you mine, and Angelina. Arrow, however, left the crew in 2015. He was discovered by King Kaka and signed into the Kaka Empire. His big breakthrough came in 2018 after he released his singles Digi Digi and murder.

He was rumored to have dated Nadia Mukami, a Kenyan singer, but Nadia came out to refute the claims. He shared a photo of his girlfriend on Instagram in 2018, but not much is known about her

He was estimated to be worth 5 million Kenyan shillings, but currently, I believe that his net worth is more than that amount.

WHY HE CALLS HIMSELF ARROW BWOY

He used to call himself Ali Cure, and that was a nickname he got in high school from girls because he used to “heal” them when heartbroken. But he changed it to Arrow Bwoy, and he says that he really likes the way an arrow is designed, once it pierces somebody, it’s hard to get it out, and it leaves that person with some kind of effect. That’s what he wants his music to do, to leave an impact, educate and entertain his fans from Uganda, Kenya, and any other country.

Arrow Bwoy, one of the fastest rising ragga dancehall artistes in the country, decided to address rumors about him dating another rising star in the shape of the comely Nadia Mukami.

Rumors had started flying when the two decided to collaborate on an urban love song called ‘Radio Love,’ and the chemistry was undeniable.

For some reason, when Kenyans see two singers of the opposite who share some magical stage and performance chemistry, they immediately assume the two are an item or at least doing the nasty naked tango.

When put to task about the nature of his relationship with Nadia Mukami, he said,

In a previous TV interview, Nadia Mukami said her relationship with Arrow Bwoy is solely professional.”He is taken and I don´t want to ruin people´s family,” she said.

Pulse: First of all, are you a Kenyan or Ugandan?

Arrow Bwoy: That has always been everyone’s question, and it is good we make it clear now. The fact that I fix some Luganda lyrics in my songs makes everyone believe I am Ugandan. The truth is that I have some Ugandan roots through my mother. However, I am a Kenyan who grew up in Mathare in Nairobi and not in Mombasa, as my Swahili might suggest.

P: You are now in Uganda; does that mean you are visiting?

AB: I can say I am home since I had won myself a big following here from when I released Digi Digi. Ugandans love dancehall music, and you will be surprised that since I released the song in September, it has made me a household name. I, however, came down to Kampala to do a project with a group called Voltage. We have been recording together, and soon as I am done, I will be back home.

P: You have been in the game for a year now…

AB: Let us say two years since I released my first single in 2015. However, before then, I was in a group called QBIC crew with whom we released songs like Angelina that never registered good reviews. Back then, my stage name was Ali Kiwa. In 2015, I went solo, but it wasn’t until this year that I got my breakthrough.

P: You are quite talented, judging from Digi Digi and Koona, that you released last year. What took you two years to be known?

AB: The showbiz industry is about many aspects other than talent. I actually expected Koona to be bigger than Digi Digi. First, I had released Mdogo Mdogo and Bila Bonus through my recording stable Fast Cash Music, but the song hardly any rating. I think I needed better management, and that is what I am getting from Kaka Empire. I also had to change my stage name to fit in the image I wanted to have.

P: How did you settle on the name Arrow Bwoy?

AB: An arrow pierces. My lyrics are made to penetrate. The message in my songs is straight-forward, as you may have realized, I don’t mince my words.

P: You also come out like that ‘bad boy’ judging from the way you were working it with the video vixens in Digi Digi…

AB: We had chemistry, and that made the video work. Besides, it was all acting. We actually met that day after we sourced her from an agency. Video vixens should make a difference in a video, and she nailed it. So, no, I’m not the bad boy type as many dancehall artistes are. I was just bringing out the vibe.

P: What is the deal with Kaka Empire?

AB: They manage me. They are in charge of my bookings, but as Fast Cash Music, I do the production bit.

P: Did you always want to become a musician?

AB:  I always wanted to become an artist, and I think the situations and challenges around my life threatened this dream. After primary school, I moved to Uganda for my secondary education as my family could not afford education for me here. It is during this time that I decided to take music seriously.

List of wedding venues in Mombasa and their Location

KDF Recruitment 2019 dates and centres; Requirements and How to apply