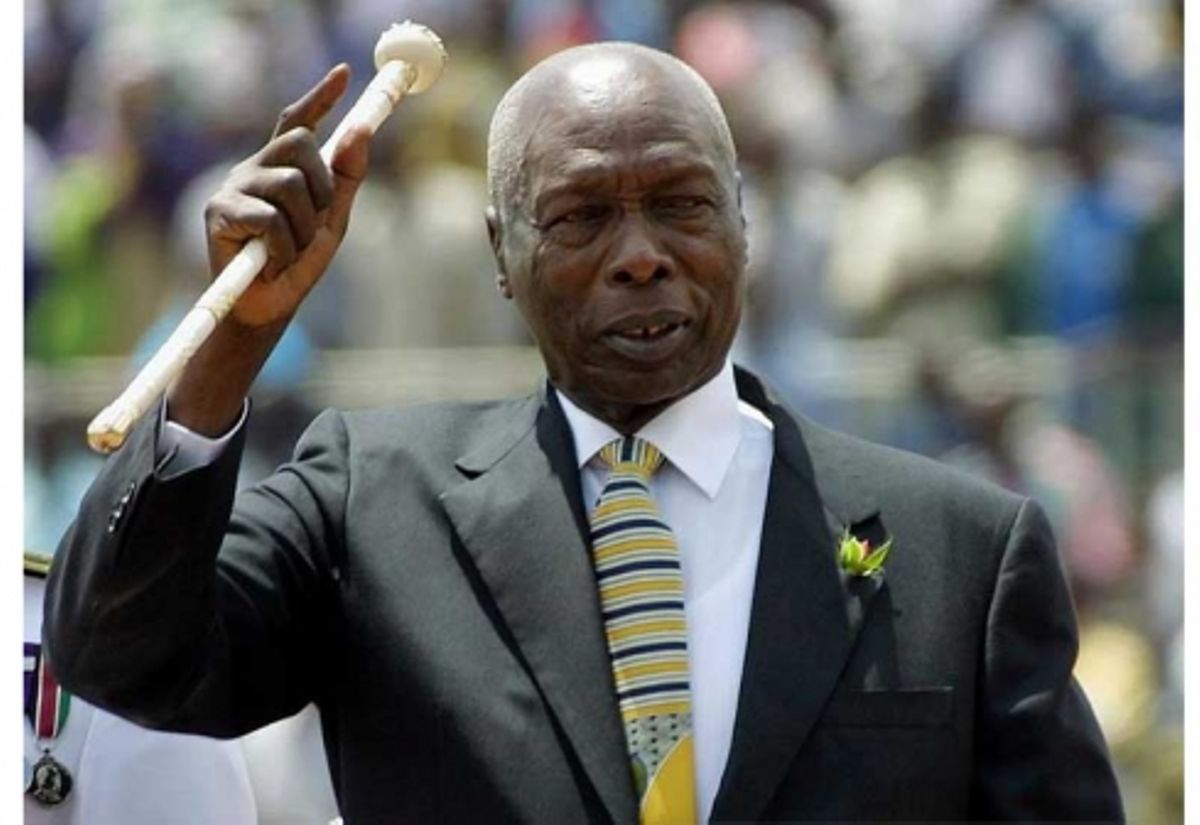 Daniel Toroitich Arap Moi  (Born 2 September 1924, Died 4th February 2020) was a Kenyan politician who was the second President of Kenya from 1978 to 2002. He became president as a result of the death of the then president Mzee Jomo Kenyatta. Through popular agitation and external pressures, he was forced to allow multiparty elections in 1991; he led his party, KANU, to victory in the 1992 and 1997 elections. Prior to becoming President, Daniel Arap Moi served as the third Vice President of Kenya from 1967 to 1978.

Daniel Arap Moi is popularly known to Kenyans as Nyayo, a Swahili word for “footsteps”, as he often said he was following in the footsteps of the first President, Jomo Kenyatta. He also earned the sobriquet “Professor of Politics” due to his long rule of 24 years, the longest in Kenyan history to date. At 95, he was currently the oldest living former Kenyan president.

Moi was born in Kabarak village, Sacho division, Baringo County, and was raised by his paternal uncle Kimoi Chebii following the early death of his father. He was from the Tugen sub-group of the Kalenjin people. After completing his secondary education at Kapsabet High School, he attended Tambach Teachers Training College in the Keiyo District. He worked as a teacher from 1946 until 1955.

In 1960 he founded the Kenya African Democratic Union (KADU) with Ronald Ngala to challenge the Kenya African National Union (KANU) led by Jomo Kenyatta. KADU pressed for a federal constitution, while KANU was in favor of centralism. The advantage lay with the numerically stronger KANU, and the British government was finally forced to remove all provisions of a federal nature from the constitution.

Daniel Arap Moi married Lena Moi (born Helena Bommet) in 1950, but they separated in 1974, before his presidency. Lena died in 2004. Daniel Arap Moi has eight children, five sons, and three daughters. Among the children are Gideon Moi (Senator, Baringo County), the late Jonathan Toroitich (a former rally driver, died 2019) and Philip Moi (a retired army officer). His older and only brother William Tuitoek died in 1995. He was a member of the Africa Inland Mission Church. Moi was the founder and patron of major schools in Kenya which include Moi Educational Centre, Kabarak High School, and Sunshine Secondary Schools, among others.

On 4 February 2020, Daniel Arap Moi was pronounced dead at the Nairobi Hospital on Monday night. He had been in and out of the hospital in the past years. His passing was announced on Tuesday morning by President Uhuru Kenyatta who has sent his condolences to the family. Moi was to turn 96 in September.

After Kenya gained independence on 12 December 1963, Kenyatta convinced Moi that KADU and KANU should be merged to complete the process of decolonization. Accordingly, KADU dissolved and joined KANU in 1964. The only real challenge to KANU’s dominance came from the Kenya People’s Union, starting in 1966. That party was banned in 1969, and from that point onward Kenya was a de facto one-party state dominated by the Kĩkũyũ-Luo alliance. However, with an eye on the fertile lands of the Rift Valley populated by members of Moi’s Kalenjin tribe, Kenyatta secured their support by first promoting Moi to Minister for Home Affairs in 1964, and then to Vice-President in 1967. As a member of a minority tribe, Moi was also an acceptable compromise for the major tribes. Moi was elected to the Kenyan parliament in 1963 from Baringo North. From 1966 until his retirement in 2002 he served as the Baringo Central MP.

However, Moi faced opposition from the Kikuyu elite known as the Kiambu Mafia, who would have preferred one of their own to be eligible for the presidency. This resulted in an attempt by the constitutional drafting group to change the constitution to prevent the vice-president from automatically assuming power in the event of the president’s death. The presence of this succession mechanism might have led to dangerous political instability if Kenyatta died, given his advanced age and perennial illnesses. However, Kenyatta withstood the political pressure and safeguarded Moi’s position.

Moi became president in 1978 following the death of Jomo Kenyatta. He quickly consolidated his power, banning opposition parties and promoting his Kalenjin countrymen to positions of authority at the expense of the Kikuyu. He also curried favor with the army, which proved loyal to him in suppressing a coup attempt in 1982. His continuation of Kenyatta’s pro-Western policies ensured significant sums of development aid during the Cold War (1947–91), and under Moi’s stewardship, Kenya emerged as one of the most prosperous African nations.

In the early 1990s, however, Western countries began to demand political and economic reforms, leading Moi to legalize opposition parties in 1991. The following year he won the country’s first multiparty elections amid charges of electoral fraud. Riots and demonstrations marred the 1997 elections, and hundreds of Kenyans, mainly Kikuyu, were killed. Easily elected to his fifth term as president, Moi promised to end government corruption and implement democratic and economic reforms. In an effort to combat corruption, in 1999 he appointed Richard Leakey, the popular and respected anthropologist, the head of the civil service and permanent secretary to the cabinet, a position Leakey retired from in 2001.