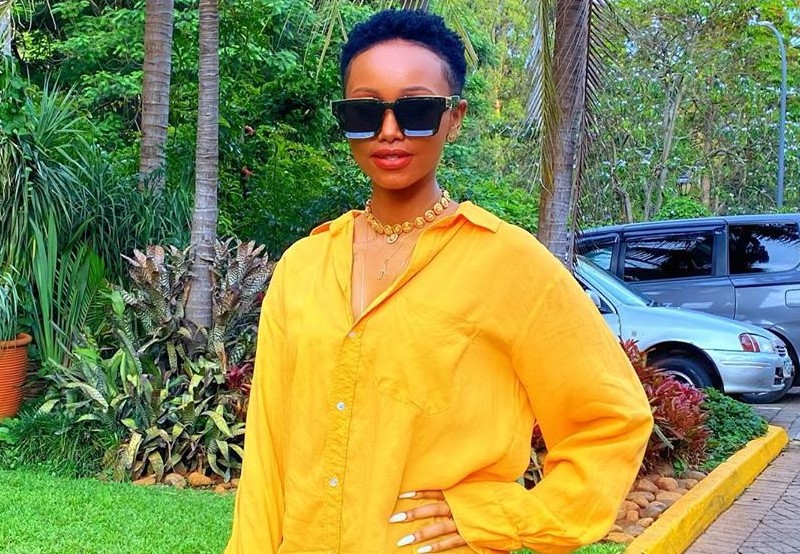 Huddah Monroe was born on 10th October 1991 in Eastleigh Nairobi Kenya. She was brought up in Huruma Estate. Her real name is Alhuda Njoroge.

She is a Kenyan socialite who ekes her living in modeling, curtain-raising events, product promotions, and personal business.

Huddah Monroe rose to fame in 2014 after she clinched the coveted slot of representing Kenya in the Big Brother Africa – BBA reality show in South Africa.

Huddah Monroe was born from a Somali father and a Kikuyu mother. Her biological father died when she was still very young. Later on, her mother remarried.

In the new family, Huddah faced a harsh upbringing at her home with lots of domestic conflicts. This made her run away from home when she was still a young child. She couldn’t take it anymore. She used to live with her four stepbrothers and a stepfather who was not so good to her.

The harsh realities she faced in her life made her develop a tough skin and unapologetic nature. This got herself titled “The Boss Lady”

Huddah Monroe says her nude photos are not meant to provoke the public, but for commercials, they are done professionally.

Huddah has a tattoo inscribed in french as a flower rebel.

Huddah Monroe is one of the Kenyan socialites who have a massive following from the Kenyan Youths. Huddah, together with Vera Sidika, has contributed to incorporating the western culture among the youths. Her popularity shot up when she participated in the Big Brother Africa event in South Africa. Even though she did not emerge the winner, she managed to gain fame not only among Kenyans but also several youths across the world.

Huddah Monroe confessed that she once abused drugs. She claimed that her loss of weight was due to the rehab that she was undergoing. She mentioned this in response to one of the claims that she was HIV positive. She explained that she is HIV negative and that the weight loss that bothered many had nothing to do with her health.

Huddah Monroe went to Kajiado Hills Girls Academy. She also attended several other schools after she was expelled from one school due to truancy and delinquency.

After high school, she ventured out into freelance modeling, computer studies and did a diploma in programming.

Huddah Monroe’s wealth was mostly gained thanks to her modeling career and business investments. She started working when she was only 16 years old, as a simple secretary in an architecture company. However, Huddah had a lack of experience and quite soon she was fired.

Thanks to her natural beauty, she was able to connect with Calif Records and starred in several music videos. Later she managed to participate in a couple of television ads. Huddah Monroe’s’s wealth doubled and she decided to invest money in the oil business and her budget becomes even more.

Huddah tries to keep up with the western stars and built Huddah Monroe makeup company just like Rihanna and Kylie Jenner. Internet and her personal Instagram account are full of photos of Huddah Monroe wearing her own makeup products. Thanks to her popularity in social networks, more and more women are buying her products.

Images of Huddah Monroe in her teens differ a lot from pictures of Huddah Monroe we know today. Instagram star does not hide the fact that she has implants in her breast. The operation was conducted in 2016. Huddah also shared with her fans, that she could die because of one of her operations. Generally speaking, Monroe refers to those stars that regularly experiment with their appearance. Huddah Monroe’s new look is no longer surprising to her fans’ audience. 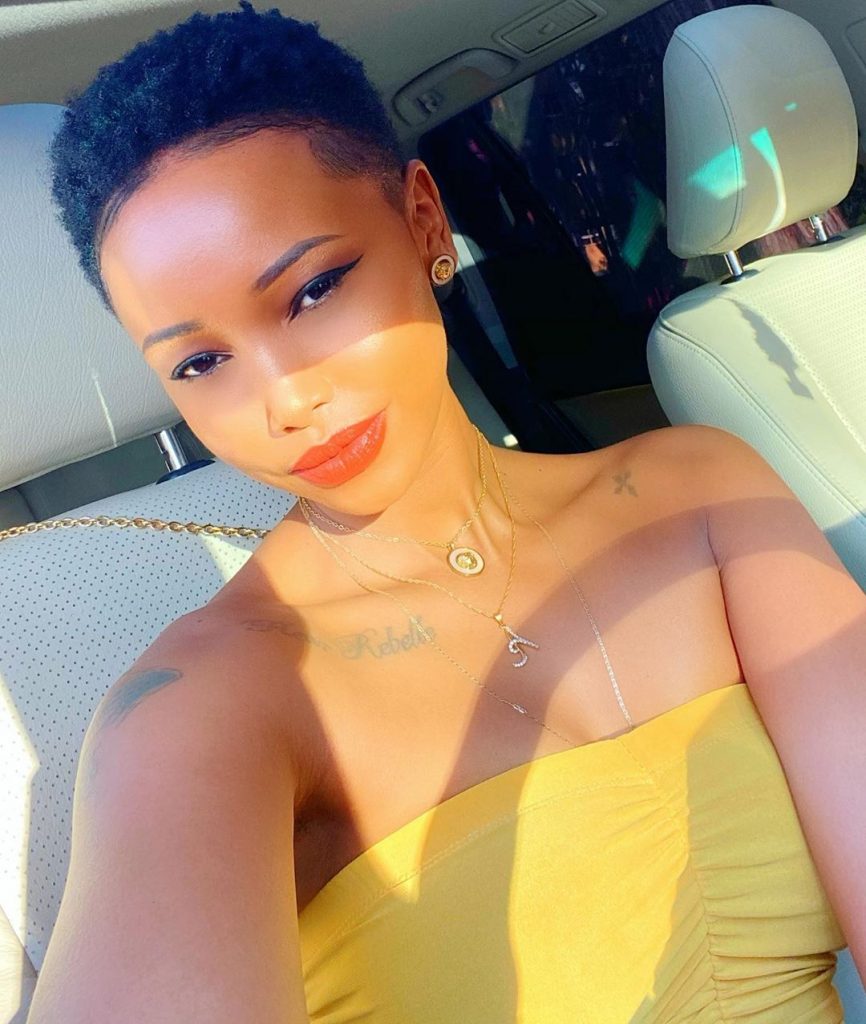 Huddah Monroe says Prezzo is not only a close friend but also her mentor. They bumped on each other on the streets of Nairobi and chemistry began.

Huddah used to live in the same house as CMB Prezzo. This was after Huddah ran into problems with her Landlord over a regular increase in her house rent. Although she claims that they slept on separate bedrooms, questions on how this can be possible were always arising. But to the public, it is known they were boyfriend and girlfriend.

According to Huddah Monroe, they started parting ways after CMB Prezzo started talking ill about her in public. They had a bitter spat in social media and blogs and they parted ways. They no longer see each other eye to eye.

“The Boss Lady” isn’t simply well known, she is likewise rich and can even fall into the class of the youthful affluent Africans within recent memory. Besides demonstrating, Huddah is likewise a big deal rancher. She possesses ten sections of land in Kenya where she develops different nourishment crops that are broadly sold in the Kenyan markets and even sent out to close by nations.

Huddah has so far accomplished significantly throughout the years, subsequently, her total assets are evaluated at $3 million. She additionally possesses autos, houses, costly adornments and has likewise fabricated a house for her mom in Kenya. As of late, the star model got for herself an arrangement as a brand representative for a marvel item, BrightenMi. This will bring her extra bars in her record and furthermore increment her total assets and notoriety. The magnificence organization said it picked Huddah in light of the fact that “she comprehends the significance of having extraordinary skin.”

Relationship Status: Who Is Huddah’s Beau?

Huddah Monroe has consistently been blamed for shamelessness. This was after she posted disputable photographs on the web-based social networking. Regardless of the considerable number of allegations, it is amazing to take note of that Huddah is in a steady relationship. In spite of the fact that she is yet to uncover who her sweetheart truly is, it is accepted that he is a renowned character and would not be Kenyan. This is on the grounds that hot Huddah Monroe once referenced on one of her online networking pages that she can’t have a Kenyan man as a sweetheart. She even went further to exhort her female fans not to date Kenyans since they are parsimonious with cash.

In a meeting, she uncovered that her beau gets her and that every one of the discussions raised about her is clear and settled. She additionally contended that she owes nothing to the individuals who blame her for immorality.

Other Interesting Facts About Huddah Monroe

Just like any other socialite, partying is an important part of Huddah’s diary. She loves attending parties and events and even revealed that some of her earnings come from there.

2. She has a symbolic tattoo

Huddah has a tattoo that was inscribed in French, Fleur Rebelle which literally means ‘rebellious flower’ in English. This is said to be suggestive of her humility.

3. Her nude photos were meant for commercial purposes only

Huddah’s semi-nude photos flooded the internet not long ago, attracting massive negative reactions from her friends and fans. But the model has explained that provoking the public was not one of her intentions, pointing out that the nude photos were only meant for commercial purposes. The photos, according to her, were professionally created in relation to her career.

4. She once abused drugs

Huddah has confessed that she once abused drugs, claiming that her recent loss of weight is a result of the rehab she is undergoing. She mentioned this in response to claims that she is HIV positive. This she denied, explaining that the weight loss that bothered many has nothing to do with her health.

5. She was once a bisexual

The sexy model had once confirmed that she was some time in her lifetime bisexual. According to her, the street taught her to do men and women while she was young and struggling to make a living. But now, this has been put aside as the beauty star now looks at building a future with the man of her life.

How To Start A Small Movie Shop Business In Kenya