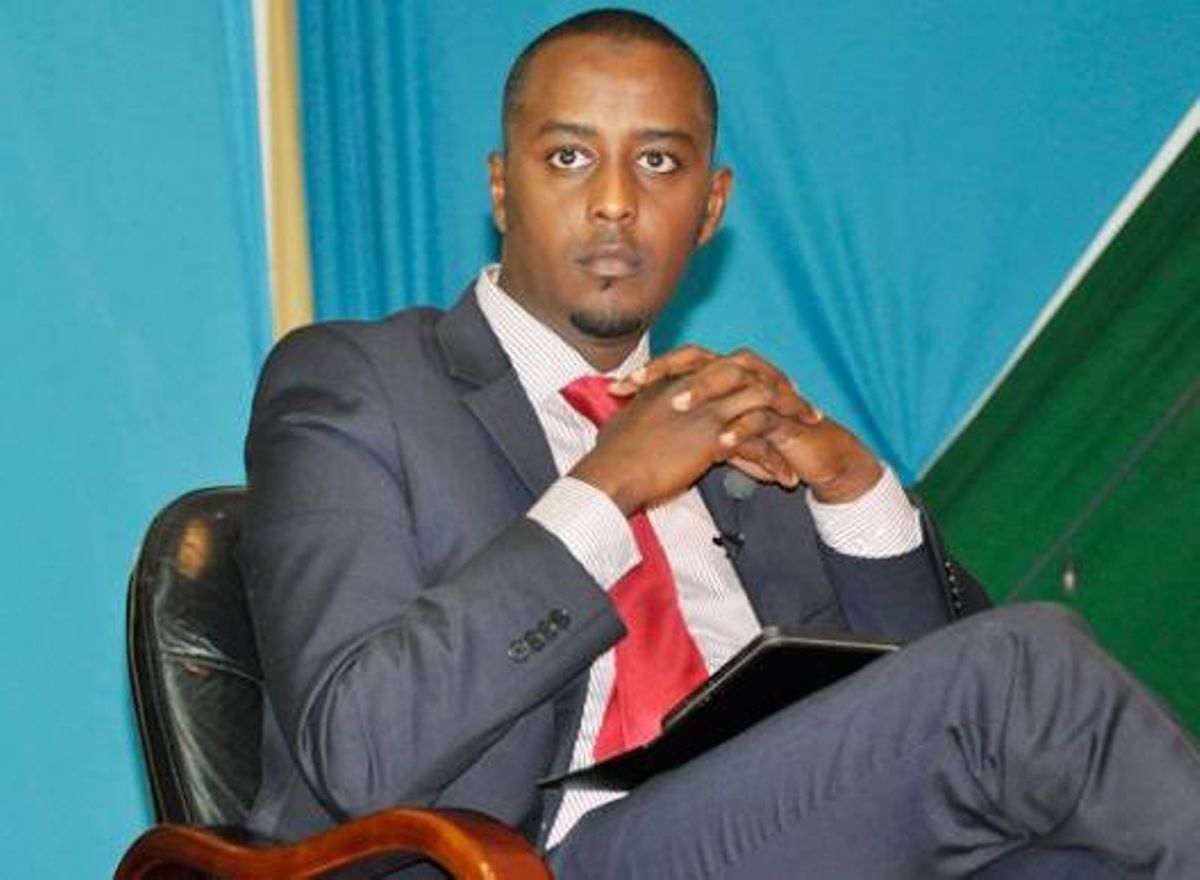 Hussein went to Kanyakine High School in Meru County, and after that in 2011 joined Zetech College to pursue his passion in Photography and partly in Journalism.

In high school, I was the Chairman of the Journalism Club, a role that I came to play again while at Zetech College. In both institutions, I aimed at inspiring and developing the art of Swahili journalism.

On a light note, After completing college, Hussein used to tell people he was on attachment, but in a real sense, he was out and about building his portfolio. When asked about ‘the attachment,’ he would tell them that he was working with the ‘Kenya Tarmacking Network’ (KTN).

Throughout his ‘Kenya Tarmacking Network’ period, he bought a DSR camera and began doing events such as burials, weddings, and other college events to keep him busy and build his skills and competencies. He had also applied for jobs at almost all Media Houses. He was called for an interview at Radio Umoja, but he didn’t sail through. After the long quest, He was called by KTN for an interview carried out by Ahmed Darwish. He knew he had finally made it. He has been

In December 2014, he walked down the aisle with her fianceé Malyun. The two got married in a traditional Islamic ceremony called Nikkah at South C at the Masjid Nur.

Away from all the glare of the camera and plush TV studios, Mohammed is a family man. He got married in 2014 to his lover Malyun at a traditional Islamic ceremony held inside Masjid Nur in South C.

His wedding was attended by his colleagues at Royal Media Services, Willis Raburu, Janet Mbugua, Esther Kahumbi, among others…

Hussein is rarely seen with his wife and has managed to keep his family out of the prying media. 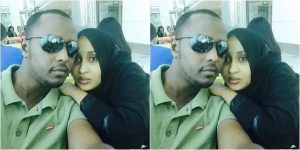 Hussein Mohamed with his wife

It has widely been argued that he is among the very best journalists, especially on interviewing the most controversial of politicians and stubborn guests on live TV shows.

However, what is least known is his monthly earnings at Citizen TV.

According to whownskenya.com, Hussein Mohammed pockets a cool Ksh 600,000 as a monthly salary.

The site also states that the said figure was reached after an increment from Ksh 400,000 when a foul cry emerged after Jeff Koinange’s salary was made public, thus causing jitters among his fellow news presenters.

Hussein is on record having successfully interviewed high profile individuals, including the several presidential aspirants before the controversial 2017 elections, the Deputy President William Ruto, Nairobi governor Mike Mbuvi Sonko among others.

Former Citizen TV’s Hussein Mohamed is a man whose star keeps on shining each day. Sources close to the news anchor reveal that international media houses are seeking the top-rated journalist.

Hussein joined Citizen TV in 2008 and has since mastered the art of being nonpartisan and ever objective in his interviews. In the recent past, he has interviewed several politicians, including former Prime Minister. The way he conducts the interviews has significantly raised his profile, thus attracting the attention of foreign media.

Several international media houses have approached him in the past two months, according to one of his close associates. Though he is not in a hurry to move out of Royal Media Services, the promise of hefty pay might tempt him to change his heart.

In July 2015, Gatundu South MP Moses Kuria caused a stir on Tuesday evening when he walked out in the middle of a live television interview.

Mr. Kuria, who was being interviewed by Citizen TV anchor Hussein Mohamed, stormed out when a clip of him allegedly inciting youth in Gatundu was about to be played.

The clip, which has elicited anger from Kenyans, shows Mr. Kuria urging his constituents to attack politicians opposed to the National Youth Service (NYS) projects.

Hussein Mohamed had asked him to explain his utterances. Moses Kuria claimed a considerable portion of the clip had been edited and demanded that the video, which he says was 45 minutes long, be played in full for Kenyans to know what transpired.

“I was taken out of context. To understand, you have to see the full footage of my speech,” Mr. Kuria said.

However, Hussein Mohammed insisted on playing the clip, which prompted Mr. Kuria to walk out.

Hussein has been hosting the popular Newsnight show every Tuesday, before which he hosted the Big Question news segment.

Hussein Mohamed early this month announced his departure from Citizen TV, affirming that he relished his experience at the leading media company.

“I have decided to take a break after October In Sha Allah to concentrate on other matters. I loved the fans, the critics, and everything in between. See you soon,” he said.

The political news anchor is known for his hard-hitting interviews and has hosted top leaders, including President Uhuru Kenyatta, his Deputy William Ruto, ODM leader Raila Odinga among others.

In 2016, he interviewed Israeli Prime Minister Benjamin Netanyahu on the Sunday Live show. The PM’s trip was the first by an Israeli leader to Africa in 50 years.

Hussein Mohammed began his career at Royal Media Services as a political reporter and rose up the ranks.

He has been described as a no-nonsense, impeccable, objective, and candid journalist and won the male media personality of the year at the Somali Glamour Awards last year.

During his last show, his interview with Senate Majority Leader Kipchumba Murkomen and National Assembly Minority Leader John Mbadi ended abruptly after his colleagues walked into the set and interrupted the interview.

Willys Raburu then shared a short video from various politicians who had the opportunity to be hosted by Hussein on his show.

An emotional Hussein watched the videos with a smile every as he listened to farewell messages from leaders who wished him well in his next step in life.

“You and I have spoken a lot about your departure, and you know how much we as a company have valued your contribution. You are a hard worker, committed, and above all, a man of integrity. I believe as you progress in the future, you will do well. All the best, Hussein,” Waruru said.

“My heart swells with pride watching how much he has grown in a short ten years. Wherever he is going, he should remember that excellent work will speak eloquently. He is talented and does not need luck, but good luck, read the Message from his former boss,” Karoney said.

Willis Raburu, in his message, shared how Hussein would pick and drop him home when he was an intern.

Sports journalist Mike Okinyi remembered when the anchor hosted sports news, but he disappeared from their desk.

“And your star just grew from there. We knew you were destined for greatness,” Okinyi said.

Presenter Sam Gituku lauded the political host for his outgoing nature and his tough stance on integrity.

“Not many people had the pleasure of working with Mohamed. There is no thorough profession like you. I am disappointed, but I know you are going to shine,” Francis Gachuri said.

“You are the best of the best, and we wish you all our luck, and we will be with you, and if you plan to come back anytime, you will be welcome. This is your home, and we will miss you,” Koinange, said

At the end of the video, Hussein emotionally thanked everyone who was part of his ten years in the media.

“I am very humbled, and I thank you all for all the messages. Now know you were never angry with me. My decision to quit was never personal,” he said.

Political leaders, some of whom were regular guests on Hussein’s show, also paid glowing tribute to the news anchor.

Here are some of their messages:

Raila Odinga – ODM Party Leader: “His interviews were well researched, and he was very persistent.”

Kalonzo Musyoka – Wiper Party Leader: “You have been analytical in your interview with political leaders.”

Aden Duale – Majority Leader in the National Assembly: “You have been a brand.”

John Mbadi Minority Leader in the National Assembly: “You have been very efficient and professional during your career.”

Raphael Tuju – Secretary-General, Jubilee Party: “He has worked his way up from his humble beginnings.”

Anne Mumbi – Kirinyaga Governor: “You have changed the quality of interviews in the media industry.”

Sakaja Johnson – Nairobi Senator: “You have distinguished yourself as a skilled journalist.”

Mutula Kilonzo Jr – Makueni Senator: “Good work for the brilliant question you asked on topical issues during your interviews.”

Eugene Wamalwa – Devolution CS: “Thank you for making us sweat during the interview and for your professionalism,”

Naisula Lesuuda – MP Samburu West: You have been an excellent journalist.”

Sabina Chege Woman Rep Murang’ a, “You have done a wonderful job for this nation.”

Babu Owino – MP Embakasi East: “You made it, you did it, and you are so courageous.”

Hussein, who has been hosting prime time show known as News Night, will leave Citizen TV after October.

“I have decided to take a break after October In Sha Allah to concentrate on other matters. I loved the fans, the critics, and everything in between. See you soon,” he said.

It is, however, not clear why Hussein will be leaving Citizen TV, but word has it that the leading station management failed to meet his demands.

A source told Ghetto Radio News that despite hosting successful political shows and interviewing top Kenyan politicians and world leaders, Hussein’s salary has not been at per with some of the new anchors poached by the station lately.

The anchor could be going to the BBC or Aljazeera, the source further said.

How To Cancel an Order on Jumia Kenya