Joey Muthengi was born on 2nd August 1985 in Kijabe, Rift Valley. She is a Kenyan media celebrity and cast. She is the host of The Jam on  Capital Fm and is the former host of 10 over 10 beside Willis Raburu at  Citizen TV which airs on Fridays at 10 pm.

She is the last born in a family of five and was born in Kijabe. At the age of 2 together with her parents, they moved to the United States.

When she traveled back to Kenya, Joey admitted she found it hard adjusting to the country’s setting: “When I came back, my parents tried throwing me in those government schools, and I kept running away. So, they ended up taking me to a boarding school in Kijabe, Rift Valley.”

After completing her secondary education in Kenya, Joey moved to the U.S. for tertiary studies, where she studied a Bachelors degree in Communication and Business Management at Hope College

She worked in the states for one year before moving back to Kenya.

She began by doing voice-overs at Capital FM, and an opening came up on The Fuse, which is a mid-morning Rock show. She then had a weekend show, and finally ended up on ‘Hits Not Homework’ until 2013. From 2011 to 2014 she served as the 1st ever Kenyan VJ (Video Jockey) for the South-African based music channel Channel O where she represented Kenyan music, entertainment, and culture to the rest of the continent.

In 2013 she hosted Season 6 of the largest reality music show in East Africa ‘Tusker Project Fame’, on Citizen TV having previously been involved with the franchise on ‘Tusker All-Stars’ which aired in 2011.

In September 2015 she began hosting the daily Drivetime show on Hot 96 Fm. In June 2016 she became a co-host of ‘Power Breakfast show on Citizen TV alongside Fred Indimuli and Willis Raburu. Joey also hosted  ‘Sugar and Spice’ at Ebru TVShe also co-hosted 10 over 10 alongside Willis Raburu on Citizen TV which airs on Friday at 10 pm. 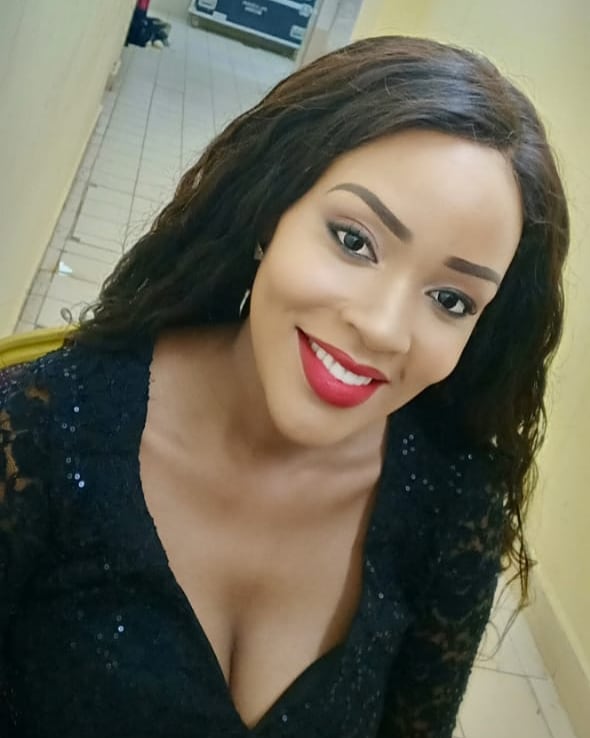 Joey Muthengi landed a new job at Capital FM, She will be in the place of Cess Mutungi who has held down the spot for over 10 years. Joey started the new job on June 3, 2019. this all after She quit her job at Citizen;

Issues for Muthengi began when she did a commercial with betting organization Betin yet Royal Media Services has its own, Shabiki. Joey Muthengi landed a new job at Capital FM, She will be in the place of Cess Mutungi who has held down the spot for over 10 years. Joey started the new job on June 3, 2019. this all after She quit her job at Citizen;

“The reasoning was that she is a Citizen TV brand and ought not to be advancing an opponent organization,” clarified another source, who mentioned secrecy since he isn’t permitted to address the media.

The moderator was as of late invited as Betin brand diplomat in the wake of marking an arrangement that apparently earned her a six-figure sum.

Prior in the year, she invested energy in Italy shooting adverts with Kenyan footballer McDonald Mariga.

The promotions have been running on main TV stations.

Mariga marked a revealed Ksh 8 million multi year-long contract with Betin in 2017 to include in the company’s adverts.

Joey is the co-founder and a Director of the Muthengi Foundation, a non-profit charity organization that aims to develop economic empowerment through education.

During an interview on Ebru TV ‘Lets Talk,’ she revealed that she dated DNG and had a messy break-up.

“We were both babies and it was like puppy love but we were both immature and it ended badly, we broke up for like a year and then we didn’t talk for so long until recently.”

Joey Muthengi is the last born in a family of 5, her brothers are Mumo Muthengi, David Muthengi famously known as Holy Dave, and one sister (Eunice Muthengi).

Things You Did Not Know About Joey Muthengi

1.  She spent part of her childhood in the U.S.

When you hear Joey speak, it won’t take forever to notice she has an American accent. It is not a fake one, but genuine; gotten from naturalization as she had spent her childhood in the United States.

The last born in a family of five was born in Kijabe and later moved to the United States with her parents when she was 2 years old. Synonymous to many lastborns, her parents ‘spoilt’ her.

When she traveled back to Kenya, Joey admitted she found it hard adjusting to the country’s setting: “When I came back, my parents tried throwing me in those government schools, and I kept running away. So, they ended up taking me to a boarding school in Kijabe, Rift Valley.”

After completing her secondary education in Kenya, Joey moved to the U.S. for tertiary studies, where she studied a Bachelors’s degree in Communication and Business Management.

She worked in the states for one year before moving back to Kenya.

2. She did a million screen tests for TV but ended up in radio

The avid admirer of legendary media personality Catherine Kasavuli intimated that she had wished to be on TV, but did not get the break-through.

“I am definitely not doing what I thought I would be doing when I started. I was interested in reporting and anchoring; came back to Kenya, did a million screen tests at every single media house; but nothing was happening – perhaps they did not like the accent.”

She later joined Capital FM where she hosted the Show ‘Hits and Not Homework’.

3. She is very reserved

When you meet and have a chat with her, you might mistake Joey for a spontaneous outgoing lady; no, she is not.

She disclosed: “I am very reserved and an extreme introvert. I cannot be around people for long hours without feeling tired; I prefer being myself – reading, writing, or watching something.”

“Though on-air somebody may think I am the most sociable person; it’s simply because I love what I do; I come alive when there’s a microphone, a crowd,” she added.

“I am not the party maniac people think I am; so if you see me at a party all alone, don’t think I am snubbing you – that’s who I am.”

Both of Joey’s parents are pastors, and so she together with her siblings grew up in a very conservative setting.

“I couldn’t wear trousers until I joined high school, I couldn’t paint my nails, do weaves. However, I could apply cutex on my nails in secret and then take it off when my mum was around.”

On the notion pastor’s kids are cheekily notorious, she said: “Some of those things they say, are true; because you get so shouted so much and when you finally go out to the real world, you are like oh I can do all of these! I probably had my phases of that but I matured up.”

When this writer met her, she was in a nicely fitting dress; nobody can for once imagine Joey was a tomboy during her childhood.

“I used to hang out with my brother (singer Holy Dave) a lot; I could wear his baggy clothes. I thought I was a boy for a period of time until I learned to embrace my feminine side,” she said.

In her style, she said: “I won’t say I am the trendiest person, but would say my style is comfortable.”

Revealing the fashion statement she’d wish away, the radio beauty said: “Leggings and crop tops are a no for me. I don’t say they are bad, but the clothes are not meant for every body type. When I see larger women wearing skin tights, I don’t think it looks nice on most of them.”

Joey is very categorical when it comes to choosing the man she would consider dating.

She intimated: “I think Kenyan women are to blame at times for dating the wrong men – we don’t set our standards as high as we should.”

What are these standards and qualities men should possess according to the radio girl?

“Be sincere in your relationship. Don’t just do the norm – if you are truly interested in this person, time is important; just put away your football for two hours, spend quality time with me when you are not on WhatsApp; it’s about where the focus is.”

“I want to feel like those two hours we spent together, your focus was on me,” she added.

7. Joey prioritizes hygiene and self-drive qualities in a man

If you look at her nails, hair, eyebrows, dress, and shoes; you’d note Joey is a clean spark. She says she wouldn’t settle on a man who does less than the effort she puts on grooming herself.

“I wouldn’t date a man whose hygiene is wanting; you got to shower, you got to groom yourself, you got to ensure you are all clean. If you are an adult, you should do adult things,” said Joey.

And what has she got to offer in return? “If there’s a genuine effort you are putting in, and you have a vision and a plan you are working on, I will appreciate you – in a couple of years, I want to be that person who stood by you.”

8. She is a perfectionist

Joey does not settle for the second position; her worst stand in everything she says is being the best.

“I am some sort of a control freak; when I see potential in something, I want to grow it – even at Hot 96 right now; I am coming in at a time I see potential.”

“The reception at Hot 96 has been great; I came in at a time team building was that weekend, and I got to know people. So far so good; I have been paired with Coco; he is insane, but I really like him.”

9. She’d been a psychiatrist if not a presenter

Joey could have been reading through people’s minds had she not been the sweet voice behind the mic.

“I had started studying psychiatry before venturing into communication; I really wanted to be a therapist. I think it’s an interesting dynamic to get inside somebody’s head and try to understand where everyone is coming from.”

Her rangi ya thao shouldn’t deceive you that Joey knows nothing about the shamba; she does!

“I have cows in Machakos that I like very much; my mum has a farm there. She keeps cows, goats, and chicken. So I came to like dairy farming; I even know how to milk – 5 AM is milking time for us. In fact, after I left Ebru Africa, I moved there for a while.”