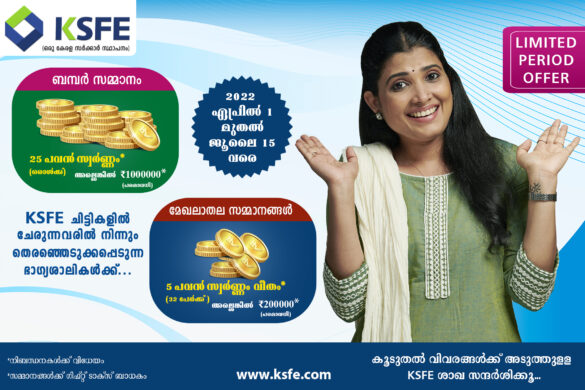 Find below customer service details of KSFE, Kerala. Besides contact details, the page also offers a brief overview of the chit fund company.

About KSFE
KSFE is a popular Indian non-banking financing company operated by the Government of Kerala. Founded in 1969, KSFE boasts of 600+ locations and caters to more than 33 lakh customers.  KSFE is short for Kerala State Financial Enterprises. The company primarily deals with chit funds, deposits and loans. The government-owned chit fund company has an annual turnover of more than 30,000 crore. Headquartered at Thrissur, Kerala, KSFE has regional offices at Trivandrum, Kannur, Kozhikode, Ernakulam, Kottayam, Kollam, Attingal, among other locations. The Miscellaneous Non-Banking Financial Company (MNBFC) was formed as a safe alternative to the private and often unauthorised chit promoters. Today, it has grown to become one of the most profit making public sector company by the state.

As earlier stated, the chief services of KSFE consists of chitty, loans and deposit schemes. Chit fund is a popular type of savings scheme where a group of people contribute towards the chit value periodically for a duration. The savings and credit product under KSFE starts with an installment of Rs 1,000 to Rs 5,00,000 each month. The duration can be 30 to 100 months. The installment amount can be paid through Internet Banking, or via cash or cheque at the nearest branch. People in an entire group get the opportunity to win the “prize money”. The payout will go to one who agrees to take lowest amount. There will be a lot drawn if more than one person bids for the amount. The discount in the payout is distributed among chitty members. KSFE takes a 5% commission on the prize money.

For NRIs, KSFE operates a separate KSFE Pravasi Chitty. If someone has won the chitty, KSFE will require that they provide a collateral. Securities accepted can be fixed deposits, short term deposits, LIC policy, bank guarantee, Kissan Vikas Patra, national savings certificates, NRI deposits, and property related title deeds or security. Participants can get higher returns on winning the prize money early. And if you are dire need of money, KSFE provides loans through Chitty Pass Book Loan and Chitty Loan. The different types of loans include Car Loan, KSFE Gold Loan, Kanakadhara Loan, KSFE Haritham Loan, KSFE Home Loan, KSFE Personal Loan and Passbook Loan. The loans are provided with most competitive interest rates. You can reach the KSFE grievance redressal desk if you have complaints on payment, installment, loan or others.