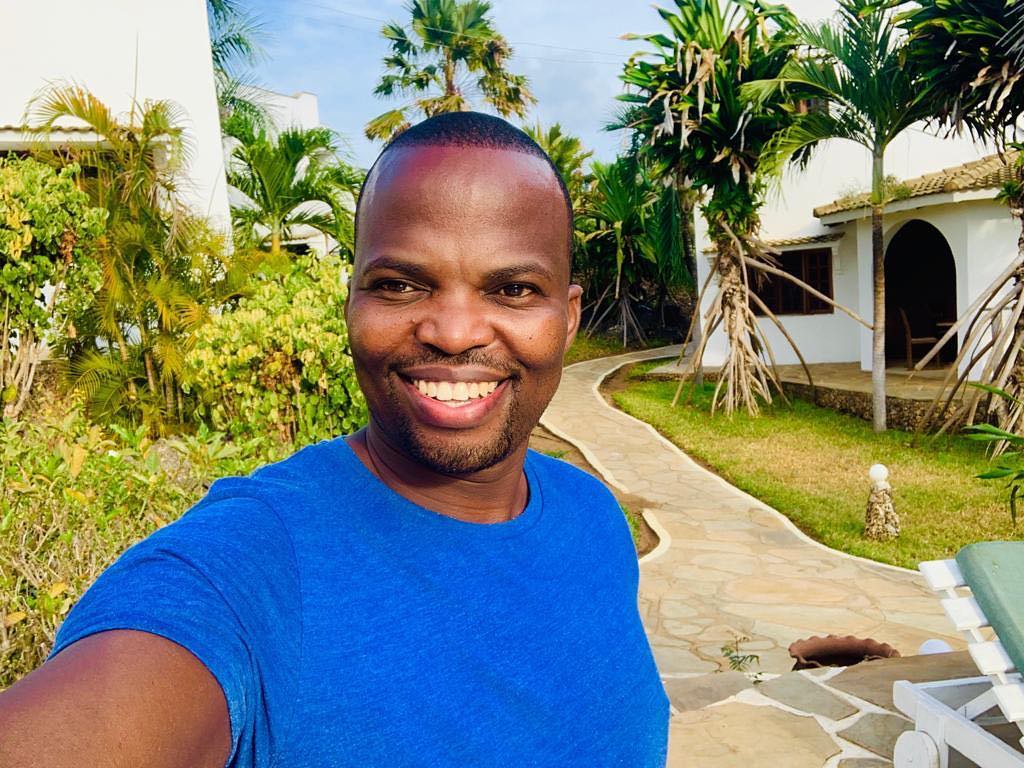 MC Jessy Biography. MC Jessy, whose real name is Jasper Muthomi, is a Kenyan comedian who was born in Egoji village in Meru county. He features in ‘Churchill’ show and hosts ‘Churchill Raw’ that airs on NTV every Sunday and Thursday, respectively, at 8:00 pm.

MC Jesse was born in the late ’1980s in Egoji Village in Meru County.

He attended his primary school in Embu County and then later his high school at St Cyprian Boys High School in Meru. The journey through his high school was not comfortable, but through the aid of well-wishers, he managed to complete his high school, and later on, he pursued a Communications Degree at the Daystar University.

Who is MC Jessy’s wife?

Allegedly, MC Jessy’s wife’s name is Elizabeth Wangare. But, MC Jessy denies knowing a woman by that name and even says that some people are out to hunt and destroy him; that is why they would come up with such rumors. While speaking to the Pulse, the comedian asked, who the Wangari people claim he is married to is? He went as far as questioning the narrative that he tied the knot in 2012 at Winner’s Chapel.

Jessy stated that he has never known a Wangari in his life (at least as a wife). Also, he rubbished claims that he was in the process of divorce. Instead, MC Jessy said that he has been happily married since 2010 and cannot understand why people would cook up such stories. During the interview, MC Jessy stated his wife’s name is Nkirote, his high school sweetheart, but not Wangari. 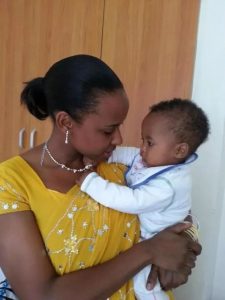 Mc Jessy sure knows how to make us laugh till we fall from our seats, but we are in the dark about his personal life. Being in the comedy industry and with the vast number of fans, we tend to get curious or even expect a big and extravagant wedding from a guy like him. He said that he married his wife in 2010. There are just a few MC Jessy wedding photos to prove that the marriage solemnization ceremony ever happened.

He says that he tried auditioning many times, including Phoenix and Churchill Show season one, but never made it. He resolved to comedy in their church, where he performed for five years. One day he met Churchill in one of Carnivore’s toilets and engaged him. They bonded, and he was given a chance to perform in episode 36, season two. Two weeks later, Churchill was away, and Jesse was asked to step on his shoes to host the ‘Churchill show.’ This led to the birth of ‘Churchill Raw,’ which he was chosen to host weekly. You cannot find the right words to describe Churchill show, MC Jessy. He knows how to work his audience whenever he gets to the stage. MC Jessy will have their ribs cracking and in tears through laughter once he opens his mouth. He is a hilarious comedian loved by the audience.

Rumor had it that MC Jessy was getting divorced to be with his girlfriend, Nancy Wanjiku. Nancy Wanjiku, popularly known as Shix Kapienga, is the rumored girlfriend of the TV comedian MC Jessy. She is a radio presenter at Hot 96 and a recognized and celebrated Kenyan actress. For some time now, Jessy and Shix have been a pair. Mc Jessy even treated her to a birthday week in Dubai. They have also been spotted on several occasions together in public. Well, the king of comedy knows how to choose them well because Shix is a stunning beauty. The photos below show MC Jessy and his girlfriend on different events together.

Mc Jessy and Shix Kapienga met through work, started off as friends, just going to different events together, but they began dating. All was not as easy as it looks for Shix because some members of the public dragged her through the mud, saying that she is a homewrecker and the reason why the comedian was leaving his wife. However, MC Jessy and Shix have denied the rumors saying that is not the case. MC Jesse met Shix when they were working together at Churchill Raw and Hot 96. Contrary to some narrative in public, MC Jesse pursued Shix. At the time, he knew that it was the right decision as he had been living as a separated man for some time. He also said that he did not dump Nkitore for Shix. According to Jessy, Shix is kind and loving and would never be a homewrecker. 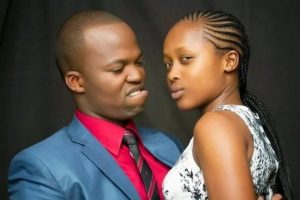 MC Jessy as he graduates from Daystar University

Churchill Raw host Jasper Muthomi, popularly known as MC Jessy has on Saturday, June 29, graduated from Daystar University. Sharing the milestone with the world, and over the moon, MC Jessy posted that “To God be the glory” and was unreservedly patted on the back by his mentor Daniel ‘Churchill’ Ndambuki. “Well deserved. Congratulations,” wrote Ndumbuki.

“Thank you so much big guy,” responded the comedian who took the world by storm following his debut on Churchill Show at episode 36, season two.

A proud Paul Kimani Njoroge, aka MCA Tricky, was also not shy in reminiscing with the comedy bigwig on his journey to higher education. 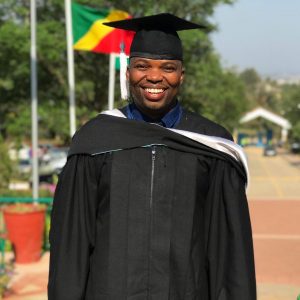 MC Jessy on his Graduation Day

In an exciting grass to grace story four years ago, Jessy narrated that his big break was as a result of a chance meeting with Ndambuki in one of Carnivore’s restrooms.

“I tried auditioning many times, including Phoenix and Churchill Show season one, but never made it. I resolved to do comedy in our church, which I did for five years. One day, I met Churchill in one of Carnivore’s toilets and engaged him. We bonded, and he gave me a chance to perform,” said Jessy.

The quest for education was not easy for the Egoji born super emcee. On completing class 8, he stayed at home for a while due to lack of fees. A sponsor, however, intervened and saw him through his High School education at St Cyprian Boys, Meru.

MC Jessy: I was once a ‘shamba boy’ for an MP

Every successful person has a story to tell of his or her journey to prosperity. Jasper Muthomi, popularly known as MC Jessy, also has his story back then before he became a household name.

The comedian currently charges not less than Sh 200,000 to host a gig, has spoken about his humble beginnings from being a ‘shamba boy’ (farmhand) to the celebrity entertainer that he is today. MC Jessy, who hosts Churchill Raw show, says that after completing form four education, he relocated to Nairobi to try and make a living.

He started out by putting up at a former classmate’s parents’ home in Kawangware, where he learned to cook and sell mandazis and chips. After staying with the family for several months, he bumped an old friend who happened to be a son of a Member of Parliament at the time.

Within a short time, he moved to his friend’s family’s residence in a leafy city suburb. On noticing how close he was to his son, the MP, whose identity MC Jessy declined to reveal, decided to employ him as his ‘shamba boy.’ Fast forward. MC Jessy has since made it in life from being a ‘shamba boy’ to one of the most marketable entertainers in Kenya who quickly get signed for advertisement deals with top companies.

Comedian MC Jesse apologized for a joke gone awry after he suggested that a member of the audience was not good looking. The member of the audience, who has since been identified as Mr. Achoka, was an old man who had attended the Churchill Show edition in Nakuru town. Even worse was how the Churchill Show cameraman zoomed on the graying, bespectacled Mr. Achoka, and his image was showed on the giant screen mounted at the venue.

As this happened, the camera focused on Mr. Achoka, who was even seen frowning. It is then that the comedian realized that his joke had gone overboard and decided to say that he was not talking about Mr. Achoka. “Hapana…no…sio huyo. Hapana, huyo ni,” he said.

The disparaging remark by MC Jesse sparked a heated debate on social media on Monday, with many fans demanding for an apologize. Hours later, the Churchill Raw host issued a poorly written apology, taking full responsibility for the goof.

“Forgiveness does not change the past, but it does enlarge the future. On behalf of Churchill Show & I, we want to take this apology (sic) to Mzee Achoka, his family, and Kenyans in general. I take full responsibility for the production of this episode that might have gone in bad taste,” tweeted MC Jessy.

Below is a photo of MC Jessy with his handsome son. 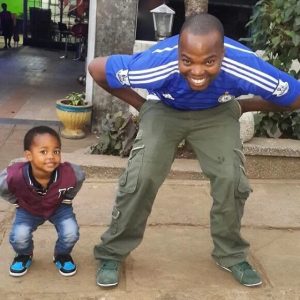 MC Jessy having fun with his son

MC Jessy Video -Handsome Men Are The Hardest To Date