Polygamy, is it legal or illegal, advantages and disadvantages 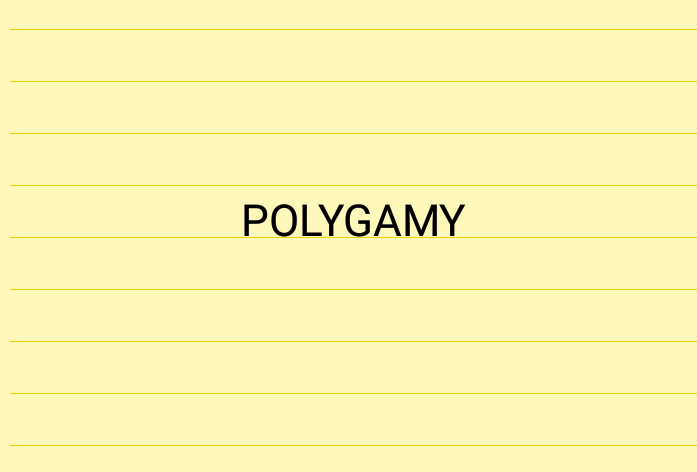 I am most certain that Polygamy is not a new term across the world. People come across this word or phrase in many ways like in the Newspapers, On Television, can also be heard when mentioned on the various Radio channels and lastly on the web. What is this polygamy in the first place?

IS POLYGAMY LEGAL OR ILLEGAL

From the Bible, Genesis 2:21-22 talks of how God made man or Adam sleep and then made a beautiful woman from the rib. When I relate Genesis 2:21-22 to Polygamy, I believe that Polygamy is unaccepted because in the bible. Genesis only talks of how God made one woman from man’s rib. I do not see where it is written anywhere in Genesis that God gave a man two or more companions. I believe God only wanted a man to have one wife, and doing the contrary is like sinning. So according to the bible and Christian belief, Polygamy is unaccepted.

From African Traditional culture or setting, Polygamy is legal. Personally, my grandfather had two wives, and my father too has two wives. In stories and tales of our grandfathers, it is evident that those people were proud of marrying many wives. So some customs allow men to marry more wives.

According to the Government Laws of Kenya, in 2014, members of the national parliament proposed a bill that would allow Kenyan men to marry more wives if at all they wished. Recently the bill was signed into law. The act of Polygamy is lawful in Kenya; hence, it is very legal.

Islamic laws allow Muslim men to marry two or more wives, and so most Muslims support the idea of Polygamy. To Christians, polygamy may be a sin, but to Muslims, it is not. The question of whether Polygamy is legal or illegal will depend on people’s religion, State Laws, personal beliefs. In Africa, it may as well depend on customs. Moving on, I want to share a brief life experience of mine as the son of a Polygamous father.

My father married my mother as his first wife, and after some years, he married a second wife. My mother has five children, and my stepmother has six children, and so in total, my father has eleven children, wow. I do not know why my father married two wives. All I know it is difficult to maintain a big family like that, given the case that you are not rich like my father’s case. Women married to the same husband mostly do not get along. One day they are talking and happy with each other, the next day they are fighting and cursing each other like the case of my mother and stepmother. My father got a job away from home, and according to him, he was to stay with one wife in the city while the other one took care of our village home. My father used to stay with my two mothers in turns while in the town. When one went to the city, the other one would go back to our village home, and this happened because both my mothers are housewives. That routine stopped and so nowadays both my Mothers stay at our village home and so my father stays alone. He later came up with another system in which he took one child each from his two wives, that is one from our house and one from my step mother’s house. The two children would be his helpers in the city when both my Mothers stayed in the village. I can say he was biased in the selection of the children who would stay with him in the town. He only selected those who were performing well in school, and those were the only children he paid for their education. He forgot the other children downright and funny enough; he does not even know the names of some of his children. The children who remain with their mothers, my father believes that the mothers should take care of them. Provide the basic needs for them, and pay for their education even though both my mothers are housewives. That bored and angered me. If my father knew that he was not going to provide for his big family, why did he start a prominent family in the first place? Back then, I thought it was cool when I saw my Mothers serve my father meals during mealtimes. He would be served different dishes of food from my mother and my stepmother on the same table at the same time. There was nothing like a family dinner because each wife had meals with her children at her own house. That was just not cool at all. That is a brief story of mine, now here are some advantages and disadvantages of Polygamy:

The only benefit of Polygamy I can talk about based on my life experience, one will be able to have many children. As we all know, Children are a blessing from God. Children can grow up to be very successful people in society, and if they become successful in life, it is the parents who will enjoy the success of their children. Like in our family, my father has a total of eleven children, and let’s say we all succeed in life, the eleven of us. It is my father and my two mothers who will significantly benefit. Children can be a source of wealth to their parents, and that is the only thing I perceive as an advantage of Polygamy. There are many other advantages, but only those who practice Polygamy can talk about them.

The first disadvantage, it is costly. The man must provide for the families. He will have to give out money for food, clothes and other basic needs for the families, which is more expensive than if a man has only one family to look after. It is also costly when it comes to the payment of children’s education. Like in my father’s case, paying education money for eleven children from primary level to the university or college level is an arduous task. My father failed miserably in funding for our education with the little money he got as a salary. When a man marries two or more wives, he has to build or buy houses or homes for all his wives. It is expensive compared to if the man has only one wife, he will only be required to purchase or build one house or home for his one wife. My father had to pay for the construction of two houses for his two wives.

The second disadvantage is that it can lead to misunderstandings and conflicts in the family. The many wives can clash in property inheritance. One would think that she was loved more by the husband, so she deserves to have the whole property to herself. The other one would also believe that as the first wife, she deserves more share of the property. The misunderstandings and conflicts among the wives may also be caused by jealousy and hatred among them. One wife may be jealous of the other co-wife because the husband spends more time in the co-wife’s house than in her residence.

The third disadvantage is that it may lead to unnecessary competitions among wives. The women married to the same husband would compete in pleasing their husband to be loved more and given more attention. The competing scenarios come or begin in meal preparation. The women will try to outshine each other in preparing the most delicious meals for the husband to be loved more by the husband. Competition may also come in terms of beauty. A man is attracted to what he can see, so the wives will try to make themselves look more beautiful than each other for the priority.

The fourth disadvantage is that sometimes partiality arises in Polygamy. I have witnessed a case where a man left his first wife and went to live with his second wife, and forgot about his first wife and children. My father was also biased as he could choose the children who he would cater for their education and forgot about the other remaining children. People practice Polygamy but do we know why they do it.

ALSO READ: HIV/AIDS, Can HIV be transmitted through Kissing

WHY PEOPLE CHOOSE TO BE POLYGAMOUS

Sometimes we may wonder why other people may choose to be polygamous or why some men choose to marry two or more wives. Here are some reasons:

ADVICE TO MEN ON POLYGAMY

Before you decide to add another wife, discuss the matter with your current wife or wives. All in all, do not practice Polygamy, you will see fire.