Home GENERAL Street children in Kenya, all the details about their life
GENERAL 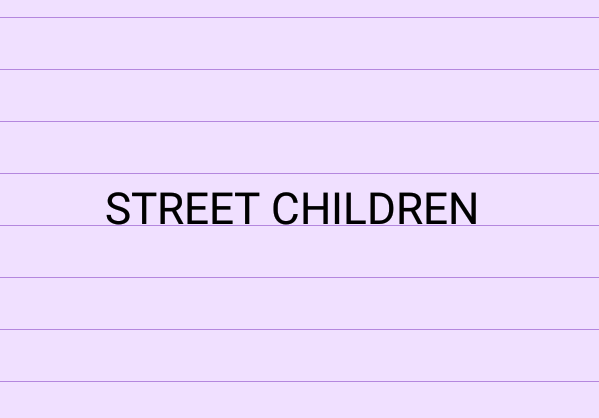 In this post, I share with my readers the life of street children in Kenya based on my interaction with them. I went out one Saturday afternoon to a particular park in Kisumu city. As I enjoyed the beautiful view of our fair city, some three street children came to me. They asked for money claiming they hadn’t eaten anything on that day. I told them to join me in my relaxation. They began narrating to me the story of how they survive in the big city with no home or people to look after them but before that who are street children?

WHO ARE STREET CHILDREN?

Street children are the homeless and impoverished children living like rats in the streets of cities or major urban centers in a country. They have no parents or people to look after them, do not go to school, eat out of mercy, and spend cold nights on the dirty streets in cities and other urban centers. In Kenya Street children are congested in the cities of Nairobi, Kisumu, Nakuru, and Eldoret. Moving on to the life of street children, here is how children may end up being street children based on the story from my interaction with them:

HOW CHILDREN END UP AS STREET CHILDREN

There are many reasons why children may end up as street children, but in this post, I focus on the three children who shared their stories with me. The first one named Evans (not his real name) ended up as a street child because he had no one to take care of him; he was an orphan. His parents lost their lives abruptly in a terrible fire accident, and his other relatives were unwilling to take care of him. He stayed alone at home for some time then later decided to look for a new life, and that included getting himself a job in Kisumu city. The experience was not relaxed as he had hoped or expected it to be once he set his feet in Kisumu. He did not get a job as nobody employs children to work for them. He had no relatives, and no good Samaritan ever came to his aid. The only solution to him at that point was to join the other street children and began the life of surviving.

The second one, named Chris (not his real name) had a different reason. He sadly admitted that his parents were alive, but he did offend his parents when he lost their only bicycle. His parents never believed his story of losing the bike. They thought that their child had sold that bicycle and so they chased him away and told him to never go back without the bike. There was nothing he could have done. He thought to himself that maybe the bicycle was more important to his parents than he was. He decided to go far away from his parents, and that is how he too ended up as a street child in Kisumu City.

The third one named Justin (not his real name) was just a naughty, tough headed and troublesome son to his parents and at home. He disliked it when his parents lectured him to change his behavior and be a good boy. He ran away from home to the big city to live his own life and there he was, a street child.

READ ALSO: Polygamy is it legal or illegal, advantages and disadvantages.

TYPES OF STREET CHILDREN IN KENYA

Evans, Chris, and Justin all agree that they are very different from each other as street children, and here is how they categorized themselves:

Evans admits that he is a Chokoraa and that Chokoraas are street children who carry dirty sacks on their backs. Those sacks are for the items they pick when wandering across the streets or in the dumping sites. The things they collect include empty water bottles that they sell to people who reuse them. Chokoraas also carry chicken and dog food that they sell to chicken farmers and dog keepers, and that is how the Chokoraa get money for their food. The Chokoraa also carry their beddings in those sacks, and that means they sleep anywhere in the streets.

The third type of street children is known as “Kijana wa mtaa” in Swahili, which means “A son of the streets.” Both Evans and Justin refer to Chris like a son of the streets because he survives by begging for money from passersby and people in parks and bus stops.

HOW STREET CHILDREN EAT AND SLEEP

Evans wakes up early every morning, takes his sack and off he goes to work. He picks food remains from the hotel, and people’s dustbins. He sells those food remains to chicken farmers and dog keepers, and that is how he gets money for his breakfast. Evans says that they all eat in metal thatched hotels and open-air hotels where no one gets uncomfortable being around them and end up chasing them away. Some street children cook for themselves. You cannot believe it, but Evans, Chris, and Justin do not know where each other sleep at night. They only meet during the day, and when night comes, every one of them goes his way. Street children mostly sleep near the dumping sites or around garbage areas of the city and others sleep on the street corridors and bus stations. Street children sleep on the cold floors of the streets, some sleep inside their sacks and others sleep on boxes or cartons, and others are lucky to get filthy mattresses and blankets from the garbage areas and dumping sites.

HOW STREET CHILDREN GET CLOTHES

Some people give out clothes to these children, usually, the clothes they won’t need, but mostly street children find clothes in dustbins and dumping sites, the clothes people have thrown away. In one particular case, Evans admits that sometimes he decides to buy clothes with the money he gets after selling food remains and water bottles.

In Kenya, approximately 90 percent of street children abuse drugs, and the standard drugs they abuse are bhang and gum or glue.  I have never seen a street child who does not sniff on a plastic bottle which contains gum or paste. When I asked Evans, Chris, and Justin why they sometimes abuse drugs, they replied that the drugs help them cope with the harsh street life. The drugs make them forget about the cruel life they are facing or living, and even if they go without food, they still feel okay. To them, the drugs sometimes act as a substitute for meals.  I am only sharing the life of street children. I do not encourage people to abuse drugs; please do not; it is very illegal and harmful to a person’s health.

ALSO READ: HIV/AIDS, Can HIV be transmitted through Kissing

The question of how they interact with new children, Evans gives out an exciting answer. Evans replies that he usually asks the new children whether their parents are still alive. If they are, he advises them to go back to their parents. Whatever mistake they made that resulted to them running away from home was never necessary, they were essential to parents than the errors they had committed. Evans says that he usually orders the new children to go back home to their parents and ask for forgiveness. Some agree and go back home, but others don’t hear him out. Evans says that if only there were easily accessed children orphanages. He would ask those new children who had no parents or guardians to seek help from children orphanages.

They plead with the Government to build orphanages that will accommodate all street children and where they shall get an education and other basic needs. They also ask good Samaritans and well-wishers out there who can take them back to school and sponsor their learning to come to their aid because most of them are very young and are willing to go back to school and be educated because they believe Education is the Key to Success.

Polygamy, is it legal or illegal, advantages and disadvantages

HIV/AIDS, Can HIV be contracted through Kissing