Home GENERAL The Top 10 Largest Dams in the World
GENERAL

The Top 10 Largest Dams in the World 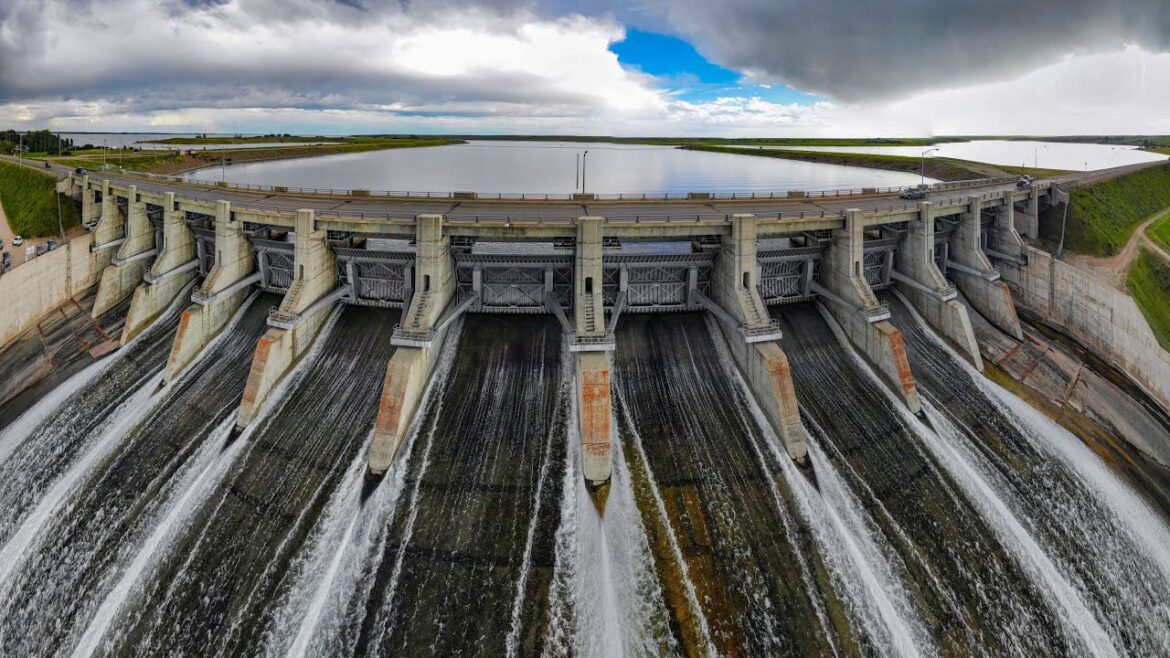 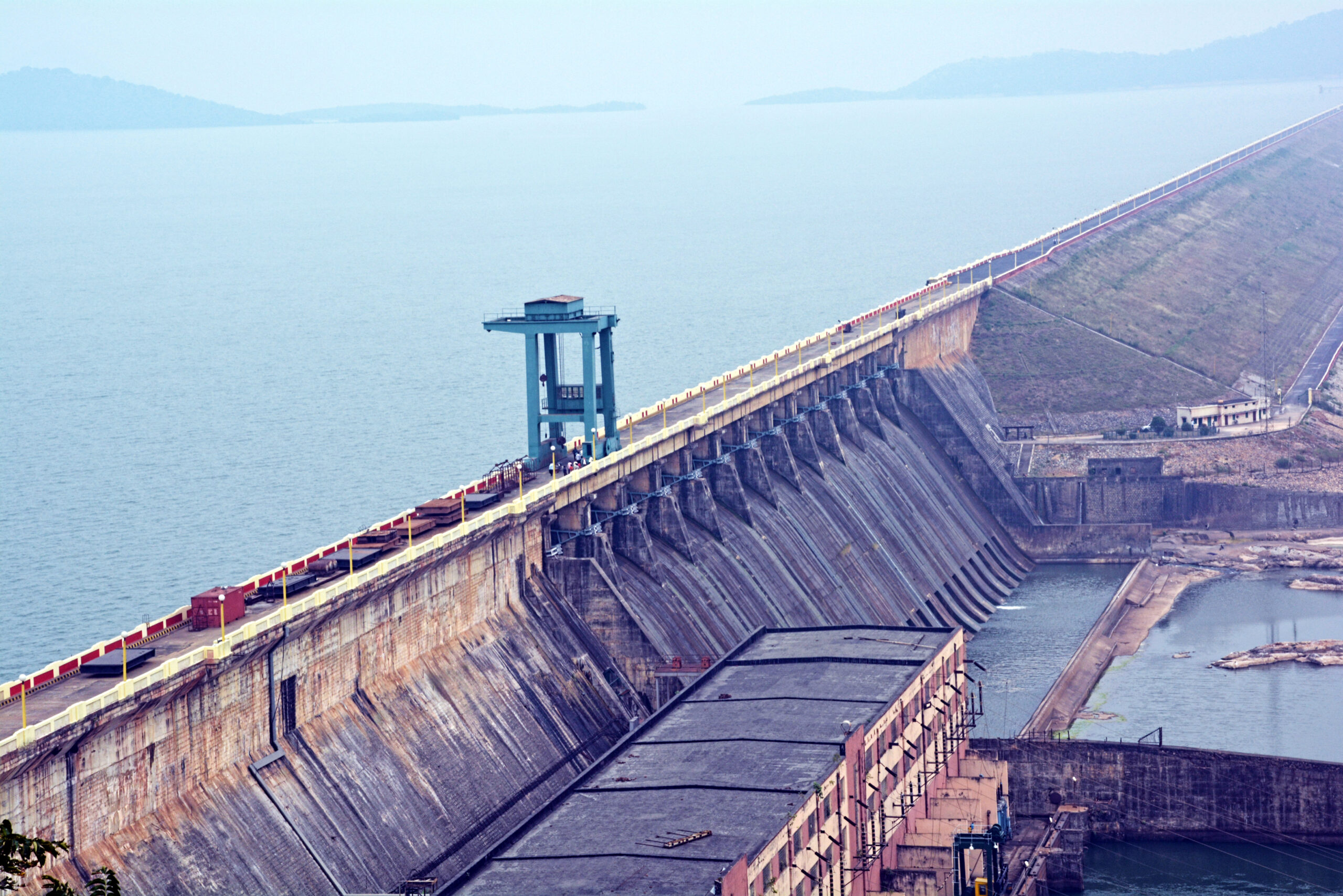 Built-in 1956 across the Mahanadi River, Hirakud Dam is the world’s largest earthen dam. It is located in Orissa India and has an extensive reservoir about 27 kilometers long. This dam has a significant place in Indian history as it was the first multipurpose valley project after the Indian Independence. Going to Orissa in watching the Mahanadi River is incomplete without visiting this beautiful yet magnificent dam. The dam is open for visitors around the year.

The tallest earthen dam in the USA at 770 FT is the Oroville dam built across the Feather River in the State of California. Used for a variety of purposes from flood control to power generation, this dam holds Lake Oroville and has a capacity of 5.6 cubic km of water. This dam supplies many farms and cities with water but has been a bit controversial after February 2017 emergency spillway.

Built between 1963 and 1975, Houtribdijk is a beautiful dam in the Netherlands. This dam connects the two cities of Lelystad and Enkhuizen with each other. Houtribdijk is sometimes referred to as a dike rather than a dam because of a beautiful 27 KM of lengthy highway running in the dam. For people with a knack for beautiful long drives, this dam is definitely worth a visit.

Mangla is the 7th largest dam in the world built in 1967 over the Jhelum River. Mangla is the second largest dam in Pakistan. It is 3.14 km long and has a water storage capacity of 9.12 cubic-Km. Situated in the Mirpur District of Kashmir, it got its name from the village of Mangla. Besides its importance, Mangla is also an amazing spot for tourism. The ancient Fort of Ramkot is a water-accessible place near Mangla and is a huge tourist attraction. Other fun activities like Boating, Fishing, and BBQ also make it one of the most visited and loved tourist spots in Pakistan. 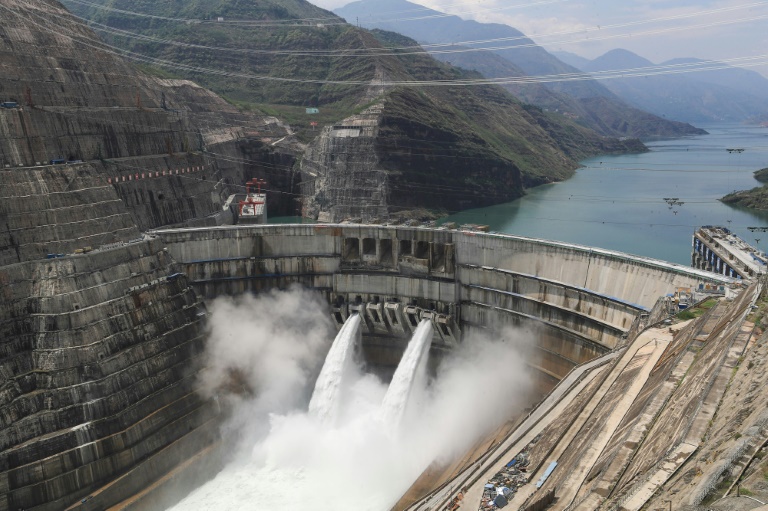 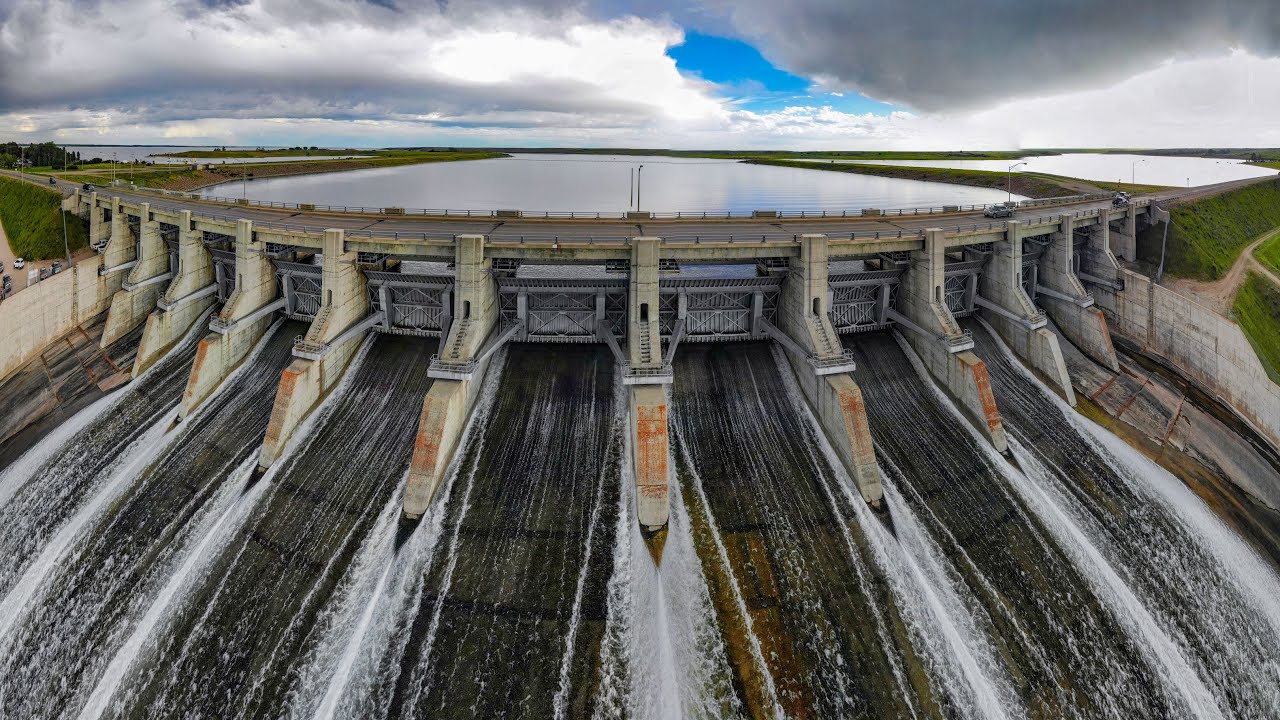 Located on the South Saskatchewan River, the Gardiner Dam is the largest dam in Canada. Gardiner has a height of 209 Ft and is about 5 Km Long, the width of 1.5 Km at its base provides it with a huge volume of about 9.4 cubic km. In addition to being one of the largest dams in the world, Gardiner is a famous tourist attraction as well. Other fun activities include hiking, camping, and beautiful picnic spots in places near the dam. 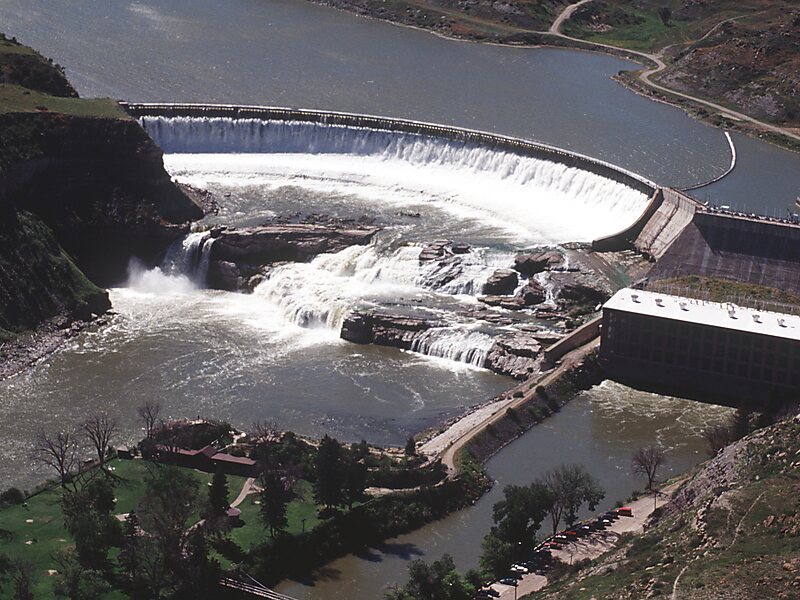 The fourth-largest earthen dam in the United States is the Oahe dam located on the Missouri River, South Dakota covering about 372 km of Land. It was built in 1968 and urged its reputation of being the second-largest dam along the Missouri River. The dam has a power plant that supplies electricity y to many of the central states. The Lake created by the dam known as the Oahe Lake is the main reason for the dam’s tourist attraction. It has a variety of natural habitats including the Pallid sturgeon and other fish species which make it worth a visit in a lifetime. 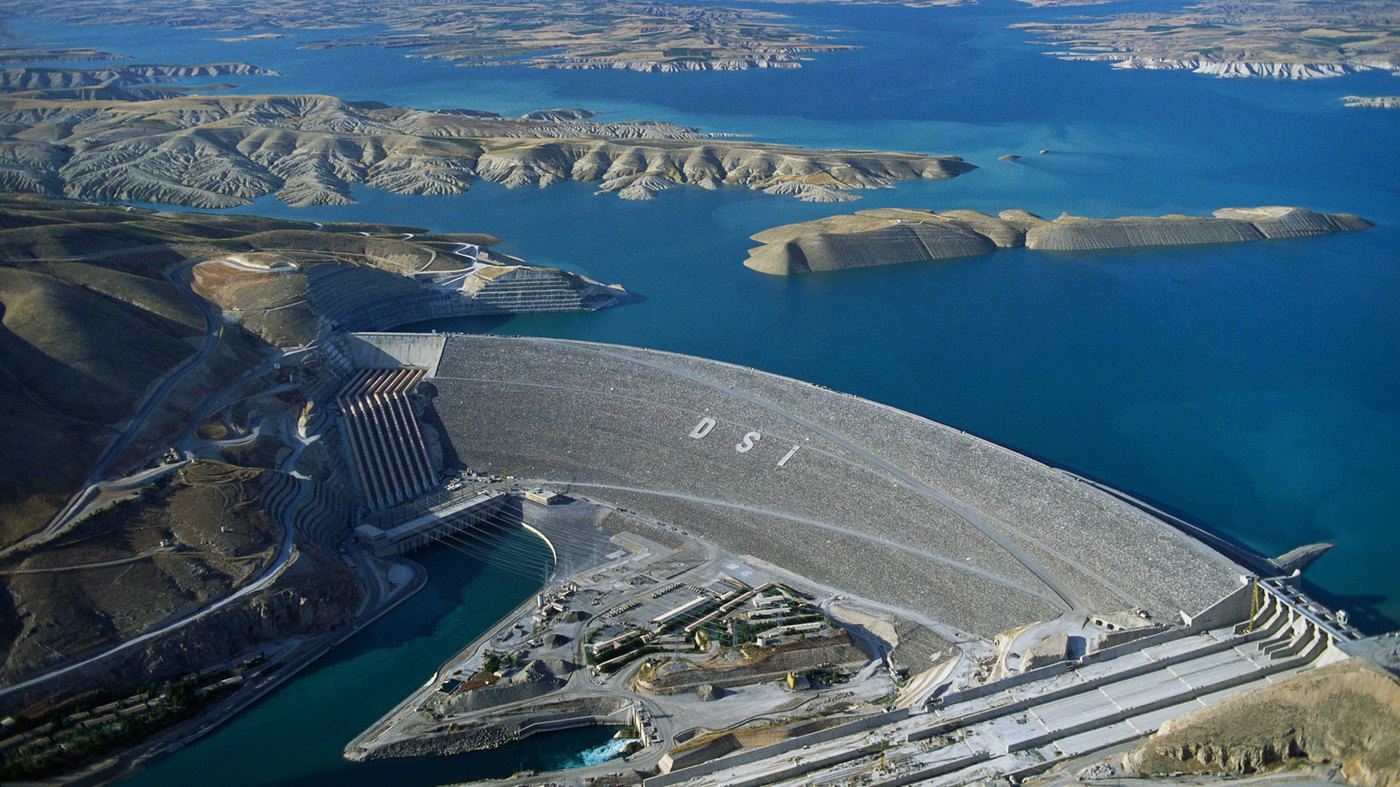 Is a zoned rockfill dam on the Euphrates River in the south-eastern Anatolia region of Turkey. Aside from being another longest dam in the world, it is also one of the tallest dams with 169 meters in height started in 1983 and construction completed in 1990 whereas the dam and the power plant were put into service in 1992. This dam forms the third biggest Lake in the world known as Lake Atatürk. It has a length of about 1.81 kilometers and a height of 554 feet which makes it one of the largest dams in the world. The dam’s power plant has a power capacity of 2400 megawatts. The second-largest dam in the world is the Fort Peck dam located along the Missouri River in North East Montana, United States be 21,026 Ft in length and over 250 Ft. in height. This dam created the fifth-largest Lake in the U.S named Fort Peck Lake. This Lake is manmade and the dam has a 2450 km shoreline which in itself is an amazing fact. Construction of the dam was started in 1933 but after multiple reconstructions was finally completed in 1940. A volume of 22.7 cubic km is one of the major reasons for its tourist attraction and is also what makes it worth a visit. 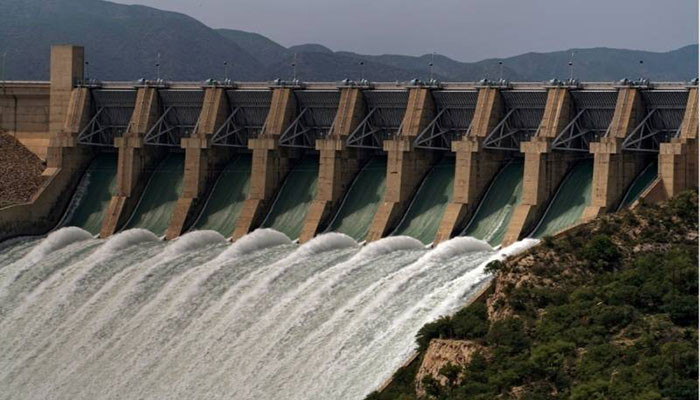 The largest earth-built dam in the world is Tarbela Dam located in Swabi, Khyber Pakhtunkhwa, Pakistan. It is 470 Ft High and has a volume of 14 cubic km making it the fifth largest dam in the world regarding volume. Its construction was completed in 1976 and is used to store water from the Indus River for multiple purposes. There are multiple features of the dam that make it worth a visit. In winters the reservoirs settle down giving a magnificent view of crystal clear blue water where fish could be seen swimming about. In summers the opening of the spillways feels like an air shower for the tourist watching from the parks nearby.

Top 10 Countries With Highest Snowfall in the World