Wilson Sossion was born in 1969 to Domoita from Pokot County, from Tulin clan. They moved from Tarta to Bomet in the early 1970s. He is an Egerton University Graduate. He trained in agriculture. He joined the Kenya National Union of Teachers in 2013 and took over from David Okuta Osiany. Osiany was the KNUT chief between 2010-2013.

Sossion’s reign at KNUT has been characterized by widespread confrontations with the teacher’s employer Teachers Service Commission.

Sossion started teaching in 1993 at his alma mater, Tenuek High School, in Bomet. Although his dream was to be a teacher, he never aspired to join the union. It’s the teachers in Bomet who conceived the idea and pushed him to vie for the position of executive secretary at the branch level. As a teacher, Mr. Sossion was absorbed in his work, staying in school throughout.

In 2000 Sossion used a donated bicycle for campaigns. Later the teachers gave him a motorbike to traverse the whole of Bomet but he narrowly lost the elections. Teachers encouraged him to vie again in 2001 and assured him of votes. True to it, the teachers gave him the votes and he won the election with a landslide. Two months later, he was elected to the national executive council in a move that changed his destiny.

At the council, he was exposed to policy and decision-making. In 2007, on the retirement of Joseph Chirchir, the second vice national chairman of Knut, he contested the post and won. Later, he went for the first vice-chairman position and was elected unopposed. He rose through the ranks to the national chair and in 2013, members requested him to switch and serve as the secretary-general. 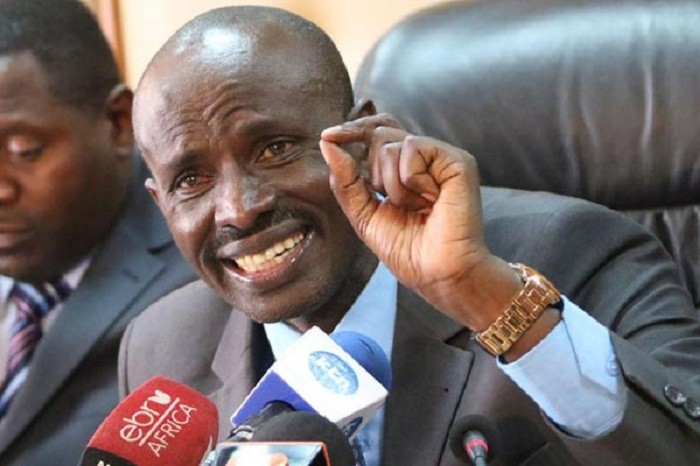 Sossion lost his first wife in 2010, through an Accident. Later, he re-married in a private function at the attorney general’s office on Thursday, April 28th, 2016. He wedded his lover Vivianne Kenduiywa.

He is a father of Three. In December 2017 surprised his first-born daughter Rosemary Chepkorir with a new car on her graduation from the University of Nairobi.  Rosemary was among those students who graduated with a law degree from the University. Mr. Sossion who has acted the role of both father and mother to his daughter after he lost his first wife in a road crash could not hide his joy as he handed the car keys to the Chepkorir. “She is the heart of my family, who has been able to make me a happy man even when raising my children. This is a motivation to all parents,” said Mr. Sossion.

There were claims that Sossion earns Ksh. 940,000 with no allowances per month in a payslip that was circulating on social media platforms. Sossion however, denied the claim that union officials earn almost Sh. 1 million a month. He said nobody in the organization receives a basic salary of above Sh. 200,000 and said that the payslip that was circulating had been cooked up by a senior adviser at the Office of the President.

Little is known about Soisson’s wealth. He is rumored to be in the long-distance business with a wealth amounting to millions.

Bensoul Biography Information How He became A Success 2020